If you've managed to find your way to this site, you obviously can see that I'm no longer updating it. Just another one of the abandoned blogs that litter my writing past.

An old friend of mine once commented that he couldn't find his way back to a post he had stumbled upon because I had "so many damn blogs." Some people collect cars, trophy wives, and other accoutrements of American privilege. Lacking that capacity, I collect blogs.

My newest blog and one I hope has a run like this one is located at the Jim Baumer Experience. It's where I'm posting what I have to say from here on out. I hope you'll become a regular over there.

I've loved posting here and in fact, it's where I cut my blogging teeth. I still find my way back here from time to time to follow the bread crumbs of my writing back to an earlier time, checking on my views and things I was thinking about at the time, five, six, and even eight years ago.

An example of a former post that I've been going back to regularly is this one, a piece that I consider one of my best, at least on politics.

For the past five years, and 832 posts, some fair, the occasional unhinged rant, and some that were good and even great, I've decided to call it quits, at least here at Words Matter.

I've been looking for a way to consolidate my online profile and my writing, and I've done that over at jimbaumer.com.

From here on out, if you want to read my blogging (which will continue, in a somewhat altered format), then the home page at that site is where to find me.

I've appreciated the many visitors over my time here, as well as the handful of regulars that have come and gone. I remain passionate about many things that prompted me to get rolling and embrace the blogging platform, and I'll continue to share them from to time via my blog at the new site.
Posted by Jim at 8:54 AM 2 comments:

I no longer subscribe to a daily newspaper. I once had dual sources of news delivered to the house. Then it was down to one, and for the past two years, my news tube, sitting lonely at the edge of the road, serves as a beacon and reminder of what once was.

I still enjoy news, and reading good writing. I find my news fix online, as many people now do. I also enjoy keeping up on what's going on as print journalism changes, with some saying that it is spiraling to its death.

A regular source for reading about the media has become the Columbia Journalism Review. I even think I'm breaking down and adding a subscription (as a replacement for my expired WSJ news allowance).

A recent article on how newspapers alienate those (like mine did with me) that actually read them, by Lisa Anderson, was particularly good. I also thought this comment was pertinent to the piece, by someone that posts as MB. This person compares the demise of newspapers to the Dust Bowl of the 1930s, an interesting analogy, I thought, and one I've never considered:

So I've given this whole issue a lot of thought and my current take on the situation is to not buy into the myth that technology killed the newspapers. I am now looking at the newspaper crisis as like that of the Dust Bowl in the '30's. The Dust Bowl was an agrarian, human, and economic catastrophe that had multiple consequences and causes. But no one would ever say that our civilization no longer needs farming or its products because the economic model failed in the 1930's. The Dust Bowl was caused by climate change in combination with damaging farming practices such as the failure to rotate crops. Their drought might be comparable to the collapse of advertising which supported print media so well for so long. And as farming developed an exploitative relationship with the land, it may be fair to say that media consolidation resulted in comparable consequences that could not sustain good journalism when the soil dried up and the wind blew away the shallow roots.

One enduring aftermath of the Dust Bowl is the collapse of family farms and the rise of giant agri-business, which Michael Pollan links so compellingly to our nation's energy and obesity crises. Good journalism might be comparable to the practice of crop rotation; it's failure might be one important factor contributing to journalism's dust bowl. I think an overlooked climate change issue is the collapse of advertising which may have been a canary in the economic coal mine suggesting that the real economy began to decline much earlier than its official onset in 2007/2008 (and might be far worse than officially acknowledged). If our culture shifts swiftly and entirely to electronic media, I believe we will experience troubling outcomes such as an unwitting apartheid of important information that reaches the desk-based workforce but leaves out other, important groups of our population. So I recognize the significance of the disruptive changes of our time but it's too easy to blame the internet.

If you are a fan of Twitter, Jay Rosen's feed there is another good source for staying current on the conversation about all things media.
Posted by Jim at 2:51 AM 1 comment:

There are some things that a state wants to be a leader in--quality of life, abundant natural resources, jobs that pay a living wage--I’m not sure that having Allen’s Coffee Brandy as your drink of choice is one of those. Then again, Maine’s been carrying the torch for the “syrupy 70-proof liquor” for more than two decades now. There are probably several reasons for this, I’m sure much of it socio-economic.

You wouldn’t gather that from the Allen’s company site, and their marketing “happy talk,” of course. Here’s their take on why Mainers love the taste of the brand. Of course, the company is quite pleased that Mainers love Allen’s:

Coffee is extremely popular throughout New England. People in Maine love coffee and products with a genuine, pronounced coffee flavor. Allen’s probably has the truest coffee taste. Coffee liqueurs and some other coffee flavored brandies tend to be sweet, Allen’s focuses on the coffee flavor not additional sweetness. Allen’s Coffee Flavored Brandy uses a natural extract from Brazilian coffee beans.

If you do a Google search for “Allen’s Coffee Brandy” and “Maine,” it brings you to an investigative set of articles, probably one of the most thorough journalistic pieces done on the Allen’s phenomenon in Maine. Interestingly, it was done over a decade ago, and was part of a series in the Portland Press Herald/Maine Sunday Telegram, when the newspaper was still a viable newspaper, and practiced journalism.

In one of my interviews for Moxietown, John Leheney, chief historian for the New England Moxie Congress shared with me a popular drink with the Maine Moxie crowd, and of course it involves both the diet version of their vaunted tonic and Allen’s Coffee Brandy. It’s called a “Welfare Mom.” (see #3)

Maybe Maine should scrap the Dirigo symbol and adopt a jug of Allen’s as our state symbol? What are some other dubious "honors" that states would rather not publicize, like Maine and Allen's?
Posted by Jim at 6:02 PM No comments:

The political event, staged at Nashua North High School, played on a theme, one that has become a chosen vehicle for politicians--the faux town hall.

Mr. Obama told the crowd that creating jobs is his number one priority. He also made it clear he was not backing away from health care. The crowd gave him several standing ovations when he talked about the importance of passing health care reform. 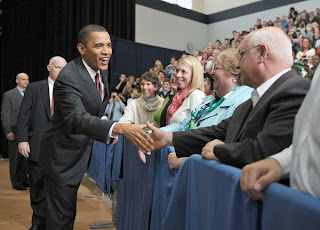 Here's the interesting thing about all this rhetoric about jobs, healthcare, and whatever else the politician of the day is sputtering on about. Rarely does talk translate into action. Campaigning and electioneering is vastly different than governing. Regardless of how skilled someone is on the campaign side of things--and Mr. Obama is certainly a persuasive and charismatic campaigner--getting Congress and the opposition to buy into your plans, and putting together programs that actually work are a horse of a different color.

Not everyone is convinced that the President's jobs plan will work. Even among progressives, generally sympathetic to Mr. Obama and his policies, there are doubts about the efficacy of this recent loan plan.

John Schmitt, an economist for the Center for Economic and Policy Research (CEPR), said that extending more loans to small businesses may not have as big an impact as some might hope. While a lack of credit is clearly a problem for small businesses, he said, a much bigger problem they face is a lack of customer demand.

"Without demand in the economy for the goods and services of small business, the availability of credit is just not sufficient," he said.

Dean Baker, co-director of CEPR echoed Schmitt's concern about the demand side affecting small businesses in the U.S. Baker indicates that studies show that demand for labor isn't affected much by lowering the cost to employers, which is what the $5,000 tax credit for each new hire essentially does.

Former Treasury Secretary Paul O'Neill says many questions remain about how the government could actually measure an increase in credit availability to small businesses.

In an email to ABCNews.com, O'Neill posed the following questions about the plan.

"Credit worthy means there is a high probability the borrower will pay back the loan in the agreed time with the agreed interest payment. How will the community banks be selected to receive the incremental money? How long will it take to get this money into the system?"

The urgency is great for the president to be able to show something tangible to the American people. Eight million jobs have been lost in this current recession. With 27 million either unemployed or working in jobs with too few hours, there is a need to add about 10 million new jobs just to return to the prerecession unemployment levels of 4.9 percent. As the Economic Policy Institute explained, "Each month we need to create 127,000 jobs just to keep unemployment from rising. Therefore, we actually need 10.9 million new jobs to get us back to 4.9 percent unemployment."

Politics is one thing, but our current predicament and excessive unemployment calls for much more from the President.